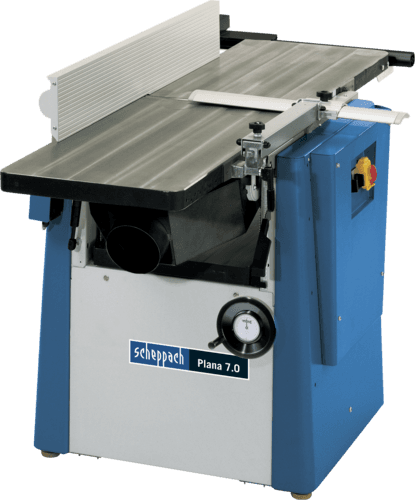 The Scheppach Plana 7.0 jointer planer is a large combination machine, and the only one of the Plana series that was solely aimed at (semi-)professionals rather than hobbyists. It is therefore only available with a 380-420V motor in a 4000 kW or 5300 kW version.

Besides its larger size, the Plana 7.0 has several differences and added functions which are not available in its smaller siblings. For example, the feed rollers have their own separate motor, which can be set to two different speeds. These speeds can be switched during operation.

There is a newer version, which can still be bought today. Confusingly it was called the Plana 6.1c, and not the 7.1c., even though they are the same size. The new version has the added benefit of a mortising table.

Know a useful link or video for the Scheppach Plana 7.0 Jointer Planer? Send me a message, and I'll update the page with your info.

Ask questions or share your experiences with the Scheppach Plana 7.0 Jointer Planer with others

All the specs and options for the Scheppach Plana 7.0 Jointer Planer