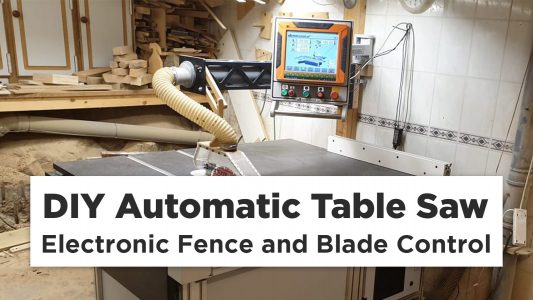 Building your own table saw?

Quite a few people enjoy making their own table saw. Usually this just means building a box with a circular saw mounted upside down. However, some people go a bit beyond that…

Roy from Bellevue Woodshop just released his homemade, completely custom-built fully automatic table saw. Via a touchscreen he can control the fence and the blade height and tilt electronically. Essentially, he has put the features of a $10k+ panel saws in his own home shop’s table saw.

However, do not think that Roy has simply modified an existing table saw by adding a few motors to make it automatic. It goes a lot further than that. He actually built the entire table saw himself, including the trunnions.

He built the first version of this saw a few years ago, and released a video about it last year. In it you can see the original design, with the biggest difference (apart from not being automatic) being that it has no trunnions.

Superficially, it may not look too impressive, due to the use of old parts that don’t look as shiny as new ones. But if you take a closer look, you’ll see that it’s been very well engineered. He prefers to reuse materials and parts he already has, rather than buy everything new. That forces one to be creative, and in my opinion makes his table saws even more interesting.

Some features of the original saw include a heavy sliding table running over steel linear rails, and a fence that moves over a linear guide. Some of these parts, like the linear rails and carriage are actually high quality and would be quite expensive if bought new.

For the new automatic version, Roy used only parts he already owned or could salvage from his job. The only new thing he bought was a $15 motion controller.

The key upgrades compared to the original saw are: Added trunnions, electronic control of the saw blade and fence, and a touchscreen to control it all. I’ll go over each of these in a bit more detail.

Note: In the video you can see all the saw’s functions. However, if you want to know more about the build process, check out this post on the Bellevue Woodshop website. It shows many pictures of dismantling the original saw and adding all the new components.

Both the fence’s position and the saw blade’s height and angle are controlled through a touch screen. The screen hangs on an arm coming from the side of the machine and can be pulled out and moved around to fit the preferred position of the user.

The software used for the touchscreen is based on Mach3, which is used for controlling CNC machines. The software can even control the blade’s speed.

The automatic fence is a great idea, because it allows you to make repeated cuts extremely accurately, even when you move the fence in the meantime. You can always just put it back to the same distance from the blade and get exactly the same width of cut.

To achieve this level of accuracy and automation, the fence runs on single carriage sliding on two pieces of 20mm SKF linear rails. It is driven with a belt by a closed loop servo motor. This ensures that the positioning will always be accurate, even if something interrupts or bumps the fence’s movement.

You might be impressed by the complexity of the electronics required for this machine to work. But I think the trunnions are equally impressive. Making those from baltic birch and phenolic sheet and have the saw move smoothly is quite an achievement. Especially considering all the weight of the motor and arbor has to be moved up and down.

The whole saw and motor construction is built inside a frame of 80x20mm steel or aluminium extrusions. The movement is controlled by a ball screw and the distances are controlled by proximity sensors. These determine the exact offset needed to set the accurate blade height and angle.

Links: If you would like to know more about this homemade automatic table saw, check out the Bellevue Woodshop website, or his Youtube channel. He seems to be happy to answer many questions, so if you want to ask him a question, there’s a good chance he’ll reply.