Regardless of where you live, woodworkers have the same basic power tool needs: They need to be able to cut wood to size, get it flat and square, and modify it to add joints or other design elements. Although these basic needs are the same, the implementation of the machines that actually perform these functions differs depending on location.

Just as with hand tools, where there are Western-style and Japanese-style planes and chisels, in the machine world there are ‘American-style’ woodworking machines, and ‘European-style’ machines.

For example, Americans tend to have a preference for the classic cabinet saw, while in Europe the sliding table saw is more popular. Europeans often use jointer planer combos, while many Americans have two separate machines, and have more types of planers to choose from.

In this article I’ll go over the most important differences between the machines available on the European and North American market, and also try to shine some light on why these differences exist.

The first difference between Europe and North America is perhaps the most obvious one – the machines are even named after them. It is the difference between what is called the ‘American-style’ cabinet saw and the European sliding table saw (sometimes called Euroslider).

The classic American-style cabinet saw design was first established by the Delta Unisaw, and most modern saws are still based on the same design. They’re massive, cast-iron machines with a wide table with two miter slots. Powerful and heavy to minimize vibration, they’re excellent machines for many tasks.

In Europe, the sliding table saw was invented in 1906 by Altendorf, but has undergone many improvements and is still technically being improved upon to this day by companies like Martin, Altendorf, Felder, and others.

The American cabinet saw has been more or less the same for decades, except for the unique SawStop invention, although similar technologies are now also available for sliding table saws.

Sliding table saws take up more space, but have advantages over cabinet saws. They are much safer to operate, because you’re just moving the sliding table, instead of pushing the workpiece past the blade with your hands or pushsticks. They can also be used to rip rough lumber without any flat sides, and ripping large MDF or plywood sheets is much easier than on cabinet saws thanks to the outrigger table.

In general, I’d say Eurosliders are more capable machines than cabinet saws, but the latter remain very popular in North America. However, in higher end shops you will find many European sliders too, and companies like Grizzly now offer a variety of sliding table saws, even for serious hobbyists.

What’s interesting however, is that in Europe cabinet saws are actually increasing in popularity too. For example, the Taiwan-made Harvey table saw is quite popular among enthusiasts. I think this has much to do with European woodworkers seeing American youtubers use cabinet saws, but I’ll expand on that in a moment.

If you’d like a comparison between the two types of saws, check out the video below by American woodworker Preston Hoffman, who explains why he still generally prefers his Hammer slider over an American cabinet saw.

Another clear difference between American and European woodworkers is that jointer planer combos are much more common in Europe. Americans more often have separate jointers and planers. I think the reason for this difference is really simple, namely space. North America is a vast continent, and the average American simply has way more workshop space than the average European.

When space is not a limiting factor, using a separate jointer and planer is more convenient and leads to a better workflow. It saves time converting the machine from one function to the other. Jointer planer combos are usually a little cheaper, however, and you do see them used in the US as well, mostly for that reason, but still less often than in Europe.

Because many North American woodworkers have enough space for a separate jointer and planer, there is also a much larger market for planers than in Europe. In Europe there is essentially nothing to choose from in between lunchbox planers and large professional thickness planers. In the US and Canada on the other hand, there is an entire class of stationary planers that have a different design.

Companies like Grizzly, Jet, and Powermatic all offer this type of stationary planer, which although less sturdy than the industrial machines, is much more solid than a lunchbox planer. They also offer a much wider planing capacity than jointer planer combos. I think it’s a shame that this model planer is almost impossible to find in Europe.

The DeWalt DW735 brings me to another point, which is the influence of Youtube. So the differences I’ve described so far have been the traditional, cultural differences between Europe and North America. But these days everyone watches the same Youtube, and is influenced by the same people.

Europeans watch American youtubers who are using DW735s, and so they are aware of those machines. While previously there may not have been enough knowledge and awareness among Europeans about this class of planers, these days they are well aware.

That’s why I expect a convergence between the types of machines people use, a sort of globalization of woodworking machinery. I can already see this here in Europe with the Harvey table saw (for example Dutch woodworker Hooked on Wood uses it, see video below). This type of classic cabinet saw wasn’t traditionally that popular here, but I think its success owes a lot to Youtube, where Europeans watch Americans use cabinet saws all the time.

All made in China & Taiwan

Despite all the differences between European and American machinery, the irony is that 95% of them are actually made in China and Taiwan. In terms of stationary woodworking machines, only premium European brands like Felder and SCM still produce in Europe, while practically none exist at all in the US and Canada. And even the company that invented the sliding table saw, Altendorf, now has a moved a large part of their production to China.

It seems that without the lower manufacturing costs of the Far East, it is hard to be competitive in today’s market for all except for the most premium machines. However, there are a few signs that some production might be coming back to the West. For example, Record Power has just joined the Made in Britain network, and produces their dust extractors and lathes in the UK again.

This might be the result of increasing wages in China, higher shipping costs, risk of trade wars, and the relatively reduced importance of labor due to automation. Add to that problems with quality control, and the need to adapt products quickly to market demands, and producing in your home market becomes more attractive.

Whether this trend will continue is difficult to say. Chinese and Taiwanese machines are also increasing in quality, and are starting to compete on quality as well as on price.

Please keep in mind that this is a generalized article, and that there are all types of woodworkers with all kinds of preferences on both continents.

There are also differences within Europe and the UK, and between Canada and the US, but addressing all of these specifically would result in too long an article.

I’m also not trying to claim that one side is better than the other. The goal of this article is just to highlight some interesting traditions and trends, and show how different people solve the same problem in their own unique ways. 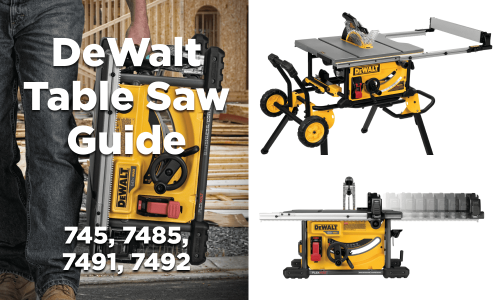