The DeWalt DW3401 and DW3501 bandsaws were small, but capable hobbyist machines, with one of their unique features being their variable speeds. This helps with cutting plastics and some other materials.

Most other vintage bandsaws in this category, like the Inca Euro 260, or the Kity 613, lack the ability to set the rotation speed. This sets the DeWalt apart and makes it much more suitable than its alternatives for cutting materials that require slow speeds (like certain metals and plastics).

Another interesting feature of these saws is the switch-on safety key, without which the motor cannot be started. I haven’t really seen it on any other bandsaw before. It may be helpful to people who don’t want their kids accidentally starting their machines.

Tip: The downside is that if you lose the key, you can’t start the machine anymore. There is still someone selling replacement keys on eBay, in case you lost yours.

Throughout its production there seem to have been two versions, one with closed plastic wheels, and one with spoked cast alloy wheels. The metal wheels are considered to be of noticeably better quality, so this might be something to take into account on when you’re looking at a used machine.

Replacement Tires: If you need to replace the rubber tires on the wheels, you can find some replacement urethane tires on eBay. They seem to ship globally. 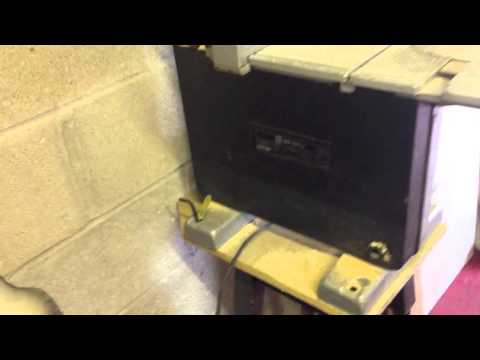 This video is actually of an ELU 3501, but it is nearly exactly the same machine as the DW3501, just different colours.

This site still sells some replacement parts for the DeWalt bandsaws. Ships from the UK.