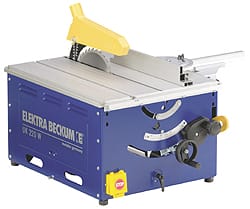 The Elektra Beckum UK 220 table saw is a special, medium-sized table saw. Its special feature is a push-pull system, which allows you to keep the workpiece stationary, and pull the saw through it. This essentially gives the saw the extra functionality of a mitre- or chop saw.

Apart from this unique feature, the saw is mostly the same as the Elektra Beckum PK 200, and many replacement parts will fit both machines.

There are several extensions available, among which a short and long sliding table and table extensions to the front, rear, and sides.

Just like other machines from the PK and UK family, there exist three versions: The initial green one by Elektra Beckum, then a blue one under the EB brand after they were taken over by Metabo, and finally a blue version officially branded as Metabo.

Know a useful link or video for the Elektra Beckum UK 220? Send me a message, and I'll update the page with your info.

This site still sells many replacement parts for the UK 220. Ships from the UK.

Official manual for the Metabo version of the UK 220, in multiple languages.

All the specs and options for the Elektra Beckum UK 220