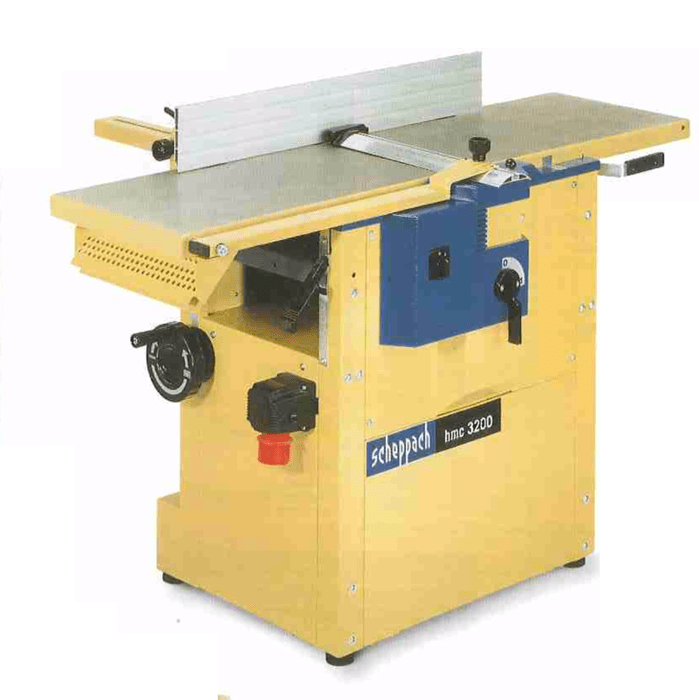 The Scheppach HMC 3200 jointer table is a solid machine from the HMC series, which should not be confused with the HMS 3200. The main difference is that for the HMC there are many extensions available (the C stands for Combination), which is not the case for the HMS machines.

This machine was only available in a 400V version, which probably meant it was targeted at smaller workshops and serious enthusiasts rather than pure hobbyists.

It is largely the same as the HMC 2600, with a few exceptions. Its fence is secured on the front and back, minimizing potential flex. There is also a wheel/transport set which does not exist for the 2600.

What both machines have in common is that they can be extended in many ways, among which a table saw and spindle moulder set. These can be attached by changing the belt from the pulley, as can be seen in this video.

One upside of this machine is that it was still made in Germany, prior to Scheppach moving much of its production to China, which started in the late 90s. It should not be confused with the HMC 3200 Ci, which was its successor.

Know a useful link or video for the Scheppach HMC 3200 Jointer Planer? Send me a message, and I'll update the page with your info.

Exploded view drawing of the HMC 3200