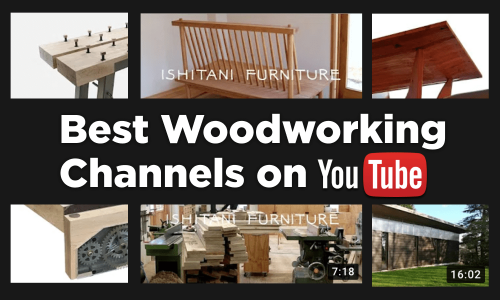 Here are my favorite woodworking channels on Youtube. They are in no particular order. First I’ll mention the ‘big’ channels that upload regularly, followed by recommendations for some small niche channels that don’t upload as often but are still really great.

Frank Howarth is one of the most famous woodworking channels out there, but if you haven’t heard of him, you should definitely check him out. He originally focused mostly on woodturning, but also does quite bit of CNC work and a range of other projects, like shop items and he did a series on how he rebuilt his basement.

What makes him unique are his videography skills (he loves stop motion) calm voice over and dry humor. His videos are entertaining, funny, but still very informative and he shows great skill at woodworking.

Andy Rawls is a Texan woodworker, who was originally educated as a videographer (which shows in the quality of his videos). He studied under Paul Sellers, and so he knows how to use hand tools just as well as machinery.

His projects are usually about building a piece of furniture, from simple to very complex cabinets or tables. Recently he diversified into making videos about machinery (his series on his massive Oliver bandsaw is pretty cool) and a series on restoring an old Airstream.

What sets him apart first and foremost is that he is a very skilled woodworker, but he is also a likeable person, and his videos are calm and relaxing but very well made. On his build videos he usually makes one version with commentary, and one without for an extra calm experience.

Ishitani Furniture is a channel from Japan about master furniture maker Natsuki Ishitani, filmed by his wife Chie. The videos also often feature their small dog.

Japanese woodworkers are considered (among) the best of the world, and Ishitani in my opinion is the most skilled woodworker on Youtube. He combines old Japanese methods with modern machinery (he even uses the Festool Domino (read my review here) now!), resulting in beautiful furniture.

His videos are mostly build videos of pieces he builds in commission for clients, but he also has a few on the vintage machinery he uses or making jigs/tools for his workshop.

Paul Sellers is one of the most famous woodworkers on Youtube. In contrast to other channels, he focuses (almost) only on hand tools. Based on his decades of experience, both in practicing and teaching woodworking, he makes videos on everything related to hand tool woodworking.

Many of his videos are about specific tools and how to use them, as well as special techniques for joinery. He also has longer videos about building furniture, but these are mostly available on his paid site, Woodworking Masterclasses. He also has a vlog now. Another popular type of video is the series on how to build a workbench, which he also teaches in person.

What sets Paul Sellers apart is his unparalleled knowledge of hand tools and how to use them, but also his calm style and wisdom. He’s a very likeable person with a particular vision on life, which he shares in his videos quite often.

Andrew Klein has a unique channel. He is not an expert woodworker (but still a good one!) like most other channels on this list, but he is a highly creative engineer who keeps coming up with new tools and jigs for the workshop.

Among his inventions are a special saw blade to cut boxes really quickly, a pencil making kit, and most recently an innovative two-speed geared vice. He also sells some of these products, and he shares his experiences of developing them on his Youtube channel.

What I like about his channel is how he honestly shares how he develops and continuously improves his inventions. He shows how he is on the one hand a uniquely creative person, but also someone who works hard to iteratively improve his initial ideas until they are good enough to be a practical product.

Marius Hornberger is a German woodworker whose main focus is on everything related to small workshops. His videos are about making a band saw, adding a spiral cutterhead to a vintage jointer planer, 3D printing parts for a dust collection system, and more.

More recently his videos are also about building furniture, and reviews of new machinery, like Hammer’s latest CNC machine.

What makes Marius different from other Youtube woodworkers is his engineering mindset, which makes him so great at finding ways to improve your workshop. He has many useful tips to make woodworking more efficient and improve your workflow. Combine this with his unique German dry sense of humour and dedication to making thorough, quality videos, and you get a great channel.

There are also some smaller channels that don’t upload as regularly, but are still really great to watch. These are some recommendations:

Kobeomsuk Furniture is a South Korean furniture maker who mainly makes build videos showing how he creates tables, cabinets, and more fine furniture. High quality furniture, with a South Korean design that makes interesting because it is a little different form most Western designs.

Kyoto Tanaka is a Japanese master guitar maker. He’s an expert who focuses on one product, and it really shows. His videos are often quite short and about one particular part of the build process, like planing the neck or sharpening a kanna. He also shares music videos where his instruments are played.

Very different from ‘commercial’ channels, but definitely one of my favorites.

Squarule Furniture is a furniture maker from Gwanggyo, South Korea. His videos show how he builds high-end furniture for his clients. He also teaches classes in person. Simply well-made videos of how beautiful furniture is being made.

Adrian Preda is a Romanian self-taught woodworker who makes videos of how he builds furniture in his small workshop. Great inspiration for people who also don’t have too much space, as he shows you can still make beautiful things even if you live in an apartment.

He uses hand tools a lot, both Japanese and Western, and also has some how-to videos how to use them or even make specific tools.

Attila’s Workshop is an Australian channel that is not just about woodworking, but also about metalworking and other techniques he needs to create his projects.

What makes him special is his extreme dedication to quality and attention to detail. He doesn’t upload videos often, but when he does, they are well produced and show great skill in both the videography and the final product.

Dorian Bracht‘s channel is focused on one thing only: hand tool joinery. His videos are about how to create beautiful, but often very complicated, joinery by hand. He currently has over 50 different joints documented on his channel. If you want to know how to make a specific joint, or just marvel at his skill, this is the right channel for you.

Kodama Designs is a very small channel, as it has only four videos uploaded currently. But if you are into CNC woodworking, and especially CNC joinery, this is a channel you have to see. He creates some of the most beautiful and elaborate CNC joinery I’ve seen, documented in excellent timelapses.

Timothy Wilmots is a Belgian former master woodworker, who specialized in making workbenches for gold and silversmiths. His videos were not just about building furniture, but also shop items like a mobile workbench. He has an amazing work ethic and is a great example of how to efficiently run a profitable woodworking shop.

Unfortunately for us, he took over his family’s farm and stopped his woodworking profession, but he still occasionally uploads videos where he builds things for use on the farm.

Estudio Hayabusa, known on Youtube as Carpintería de Japón Shokunin. Sashimono. Kumiko. is a Spanish woodworker who specializes in purely Japanese hand tool woodworking techniques. He is a master at this and gets pretty close to actual Japanese master woodworkers.

Do you know any good woodworking channels on Youtube that I missed? Let me know in the comments below!