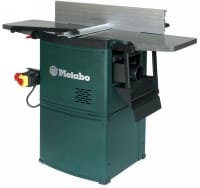 The Metabo ADH 1630 jointer planer is a machine from the Magnum-series, which is well known for its quality. In contrast to the other Magnum machines, and its slightly smaller predecessor (the ADH 1626), this machine was not made in Germany. It was built in the Lurem factory in France after Metabo acquired Lurem.

Some other advantages are the integrated stand, making it more stable, and a patented anti-kickback system.

From 2000 onwards, a very similar machine was also sold as the Elektra Beckum HC 300 and later as the Metabo HC 300, and another version as the Emco MH30. Emco and Elektra Beckum were both taken over around that time and Metabo started selling multiple identical machines under different brands.

A larger similar version of this machine is the Metabo ADH 310, which besides larger capacity also has a cast-iron jointer table, which the 1630 lacks.

Know a useful link or video for the Metabo ADH 1630 Jointer Planer? Send me a message, and I'll update the page with your info.

Manual for Elektra Beckum HC300 (very similar machine). Most things will also apply to the ADH 1630.