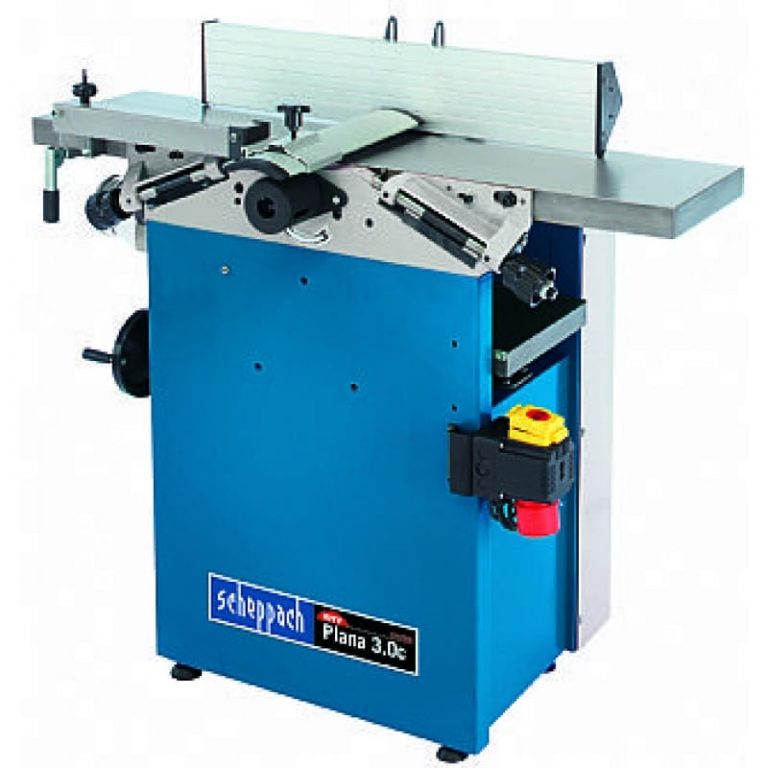 The Scheppach Plana 3.0c jointer planer is a combination machine that succeeded the Scheppach HMC 2600 ci. It is also essentially the same machine as the Kity 2636, which was also produced by Scheppach after it took over Kity. Just like the other machines, the Plana 3.0c had a mortising extension available.

The main differences with its predecessor are the smaller jointing width (250 vs 260 mm), but the longer planing and jointing tables, as well as significantly increased planing height. It does however lack the function to disable the feed rollers, which the HMC 2600 ci did have.

Another small change is the faster throughput rate (8m/min vs the usual 5m/min) which means you can work faster, but planing results could be slightly worse.

The jointer and planer tables are made from cast iron. Along with its heavy weight and integrated stand this makes it quite a stable and sturdy machine. The larger version of this machine is the Scheppach Plana 4.0c, and succeeded by the currently still available Scheppach Plana 3.1c.

There are several machines under different brand names that are very similar, such as the Holzmann HOB 260NL. These are most likely licensing the design from Scheppach and produced in the same (Chinese) factory.

Know a useful link or video for the Scheppach Plana 3.0c Jointer Planer? Send me a message, and I'll update the page with your info.

Be the first to share your experiences with the Scheppach Plana 3.0c Jointer Planer

All the specs and options for the Scheppach Plana 3.0c Jointer Planer