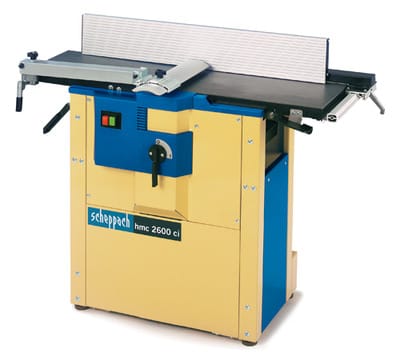 The Scheppach HMC 2600 ci jointer planer is the successor to the HMC 2600, with the main improvement being its cast iron tables, which are a major upgrade over the sheet metal tables of its predecessor. The HMC 3200 ci is its larger brother.

Two other new features are the ability to turn off the feed rollers when you are just jointing, and the addition of a micro switch for safety. This micro switch means you cannot turn on the machine if the dust hood is not in the right position.

There are two main extensions available for this machine: A mortising table and a spindle moulder. The spindle moulder attachment also sometimes comes with an additional sliding table, making it quite a capable combination machine.

One potential downside to this machine is that it was produced in the period (mid-2000s) Scheppach was moving (parts of) their production to China, so it is unclear to what extent this is a German or a Chinese machine.

It was succeeded by the Plana 3.0c, which has slightly longer planing and jointing tables.

Know a useful link or video for the Scheppach HMC 2600 ci Jointer Planer? Send me a message, and I'll update the page with your info.

Catalog of the HMC 2600 ci showing specs, images, and detailed description of the machine.

Detailed exploded drawing of all parts and part numbers of the Scheppach HMC 2600 ci.