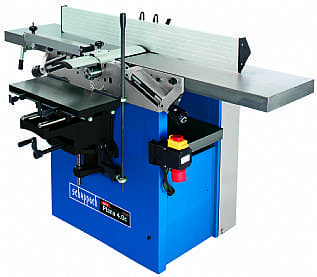 The Scheppach Plana 4.0c jointer planer is a combination machine with an optional mortising table extension. It is the successor to the older HMC 3200 ci. It is essentially the same machine as the Kity 2638, which was also produced by Scheppach after they took over Kity.

The Plana 4.0 is a very similar machine, but lacks the mortising table of the 4.0c. There are a few other differences, namely that the combination version has 10 mm less jointing width, but 30 mm more planing height capacity. Both machines have cast iron tables.

It also lacks the ability to turn off the feed rollers, but the feed rate is a little higher (8m/min) than most other Plana machines (5m/min). This means you can work faster, but can get slightly worse planing results.

It was succeeded by the Plana 4.1c, which can still be bought new today.

Know a useful link or video for the Scheppach Plana 4.0c Jointer Planer? Send me a message, and I'll update the page with your info.

Ask questions or share your experiences with the Scheppach Plana 4.0c Jointer Planer with others

All the specs and options for the Scheppach Plana 4.0c Jointer Planer