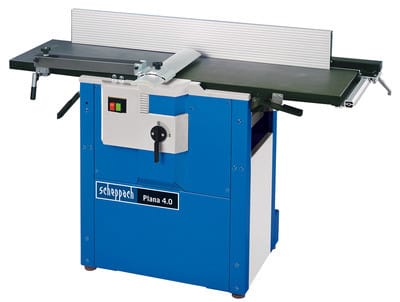 The Scheppach Plana 4.0 jointer planer is the successor of the HMS 3200 ci, and very similar to the Plana 4.0c, but without any extensions available. The smaller version of this machine is the Plana 3.0.

It is very similar to its predecessor, and does not come with any significant upgrades. It also has cast iron tables, an integrated dust hood with a micro switch — this means you cannot switch on the machine if the dust hood is not in the correct position.

On the side there is a simple switch with which the planer feed rollers can be turned off when you are jointing. This is the only machine in the Plana series to have that functionality.

One curious difference with its smaller brother (the Plana 3.0) is that it has less height capacity for planing. It does have 10mm more width when jointing compared to the combination version of this machine, the Plana 4.0c.

This machine was discontinued, and only the combination version (Plana 4.0c) was updated and can be bought new today as the Plana 4.1c.

Know a useful link or video for the Scheppach Plana 4.0 Jointer Planer? Send me a message, and I'll update the page with your info.

Be the first to share your experiences with the Scheppach Plana 4.0 Jointer Planer

All the specs and options for the Scheppach Plana 4.0 Jointer Planer