Find out the differences between JET’s thickness planers and see which one may be right for you. 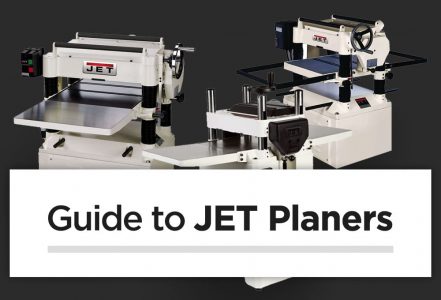 If you’re looking for a new planer, chances are JET is one of the brands on your list. However, they sell four different models and it may not be completely clear what makes them different. This guide will help you understand each model and find out whether they are the right machine for your specific case.

The two 15-inch planers are very similar, but the two 20-inch planers differ a bit more. We’ll look at each one individually and then compare them. If you’re short on time, skip to summary at the end to find out which planer may be right for you. 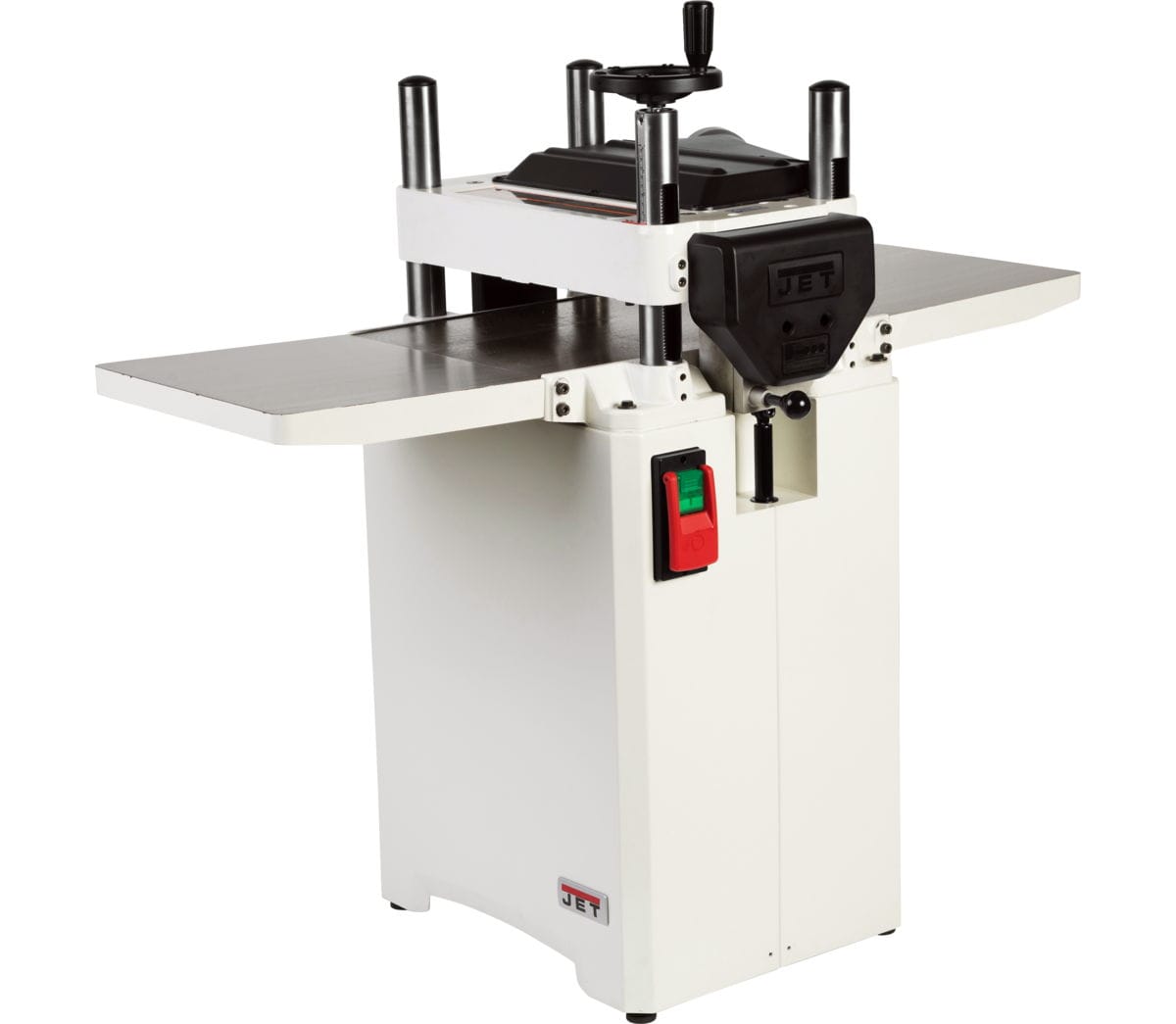 Earlier this year (2019), JET released a completely redesigned version of their 15-inch models. If you look at videos of the older model, you will notice that it very much resembles the current 20-inch model. The new model is a significant redesign and has been turned upside down — literally, because now the cutterhead goes up and down instead of the table.

This new design choice is unlike almost any stationary planer, and is more similar to benchtop lunchbox planers, which also have a moving cutterhead instead of a moving table. To what extent this influences planing results is hard to judge, and can only be really determined through rigorous testing. But the fact that JET has released two of their key planer models with this system should be a good indication that it works well.

One potential advantage is that instead of moving a heavy cast-iron table (along with sometimes the weight of the workpiece) you now move the cutterhead up and down, which could be lighter. It also makes it easier to see if you’ve reached the desired thickness, because the depth of cut is shown on top, instead of below the cutterhead.

To reduce snipe, JET has added an air-pressure support system on both sides to make sure the cutterhead maintains even pressure throughout the entire cut. It is supposed to help avoid a drop of the cutterblock, which can happen near the end of a pass.

JET’s 15-inch planers run on a 2200W (3HP) motor and can handle workpieces up to 153mm high. This is a little lower than on many jointer planer combos, and suggests this machine is more aimed at planing the faces of wide boards than their sides. However, many woodworkers usually joint one side, and then cut the second side parallel on the table saw, so it is not a major issue.

The maximum depth of cut is 1/8″ (~ 4.7mm) in a single pass on a full width board, which is plenty for most people. The machines have two feed rates:  4.9 and 6.1 m/min (16 and 20 ft/min), which is slightly on the slow side, but will help you get better planing results. The feed rates can be adjusted by simply pulling a lever on the side of the machine.

There are two versions of the JET 15-inch planer: the JET JWP-15B and JWP-15BHH. The key difference is that the 15BHH has a helical head or spiral cutterhead. This means it has 48 individual cutter inserts following four spiral curves around the cutterblock instead of 3 standard knives.

The Helical Head model is also slightly heavier, which is most likely due to it having cast-iron extension tables. The extension tables on the normal model are made from steel instead.

Using a helical head (also called spiral cutterhead) has several significant advantages. Firstly, it is more user-friendly, because it is easier to setup, requires less sharpening, and can deal with damage much better. Each individual cutter has four sharp sides, and if it is dull or gets damaged it can simply be turned 90 degrees, without any adjustment needed.

The helical head is also quieter, with JET claiming it an almost 20 dB noise reduction. Other manufacturers often claim in the region of 10 dB reduction, but the fact that it is significantly quieter is unquestionable. Keep in mind that a 10 dB difference is almost double the perceived loudness.

Additionally, spiral cutters are also better at dealing with difficult grains, and will in most cases deliver better planing results.

Is the Helical Head upgrade worth it?

Given all its benefits, it seems only logical to upgrade to the helical head model. However, it is more than 50% more expensive. Does it then still make sense to upgrade for such a hefty price?

This will obviously depend on your budget, especially if you are buying multiple machines at once. For the price difference you could almost buy a very decent second-hand jointer or table saw, for example. One thing to consider is that you will probably save costs on sharpening and replacement of blades, which reduces the price difference slightly.

Also, if you plan on using the planers in a professional shop, any time you avoid spending on setting up blades or waiting on new blades to be sent back from sharpening is time you could spend earning money. This could tip the (monetary) balance in favor of the helical head model.

Compare prices for the JET JWP 15B and 15BHH 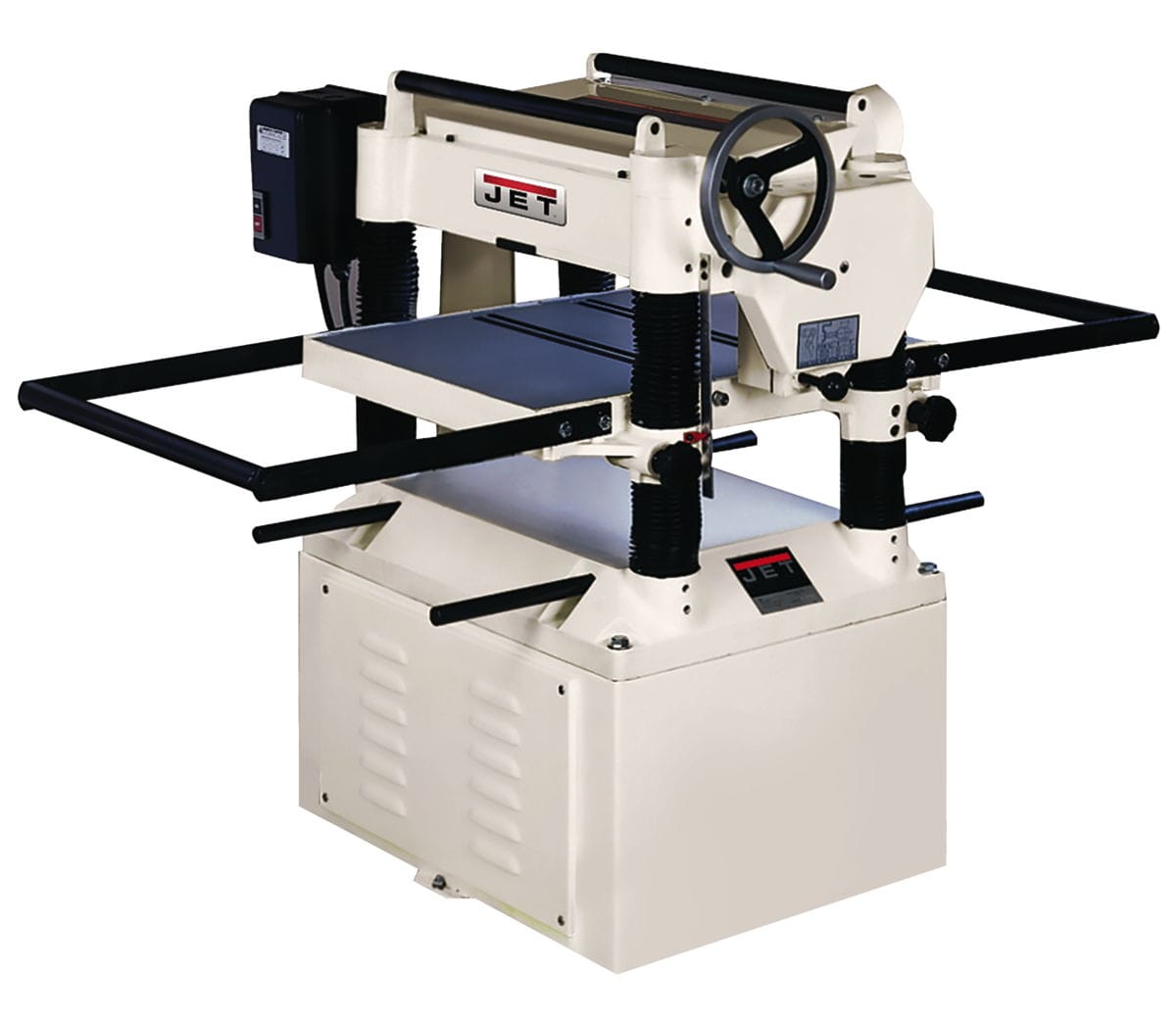 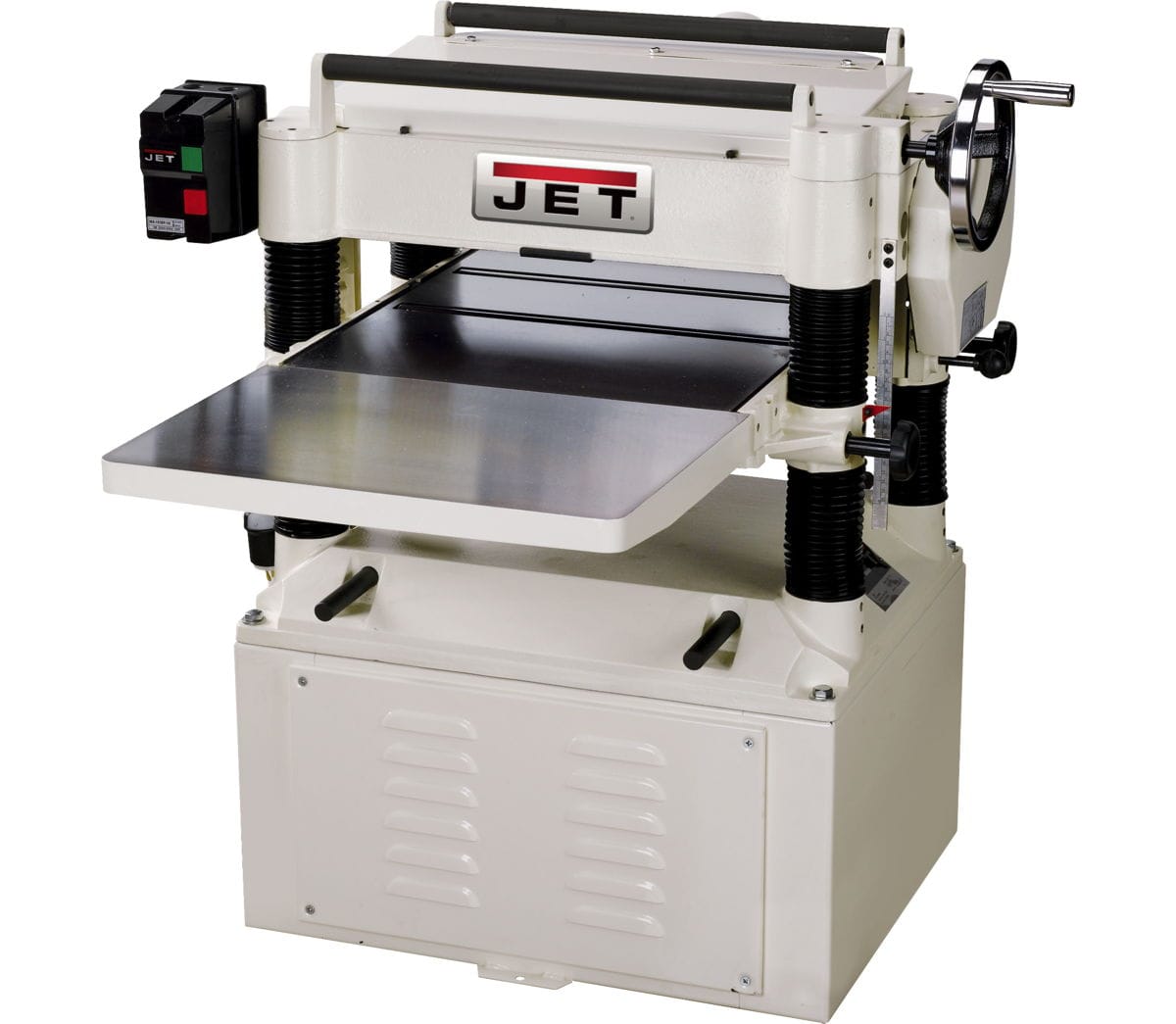 The two 20-inch models are still based on the old design. This is not necessarily a bad thing, because the design is tried and tested and you can be sure the machines work well. There are two models: the JET JWP-208-1, which is less powerful and has standard blades, and the JET JWP-208HH, which has a powerful 5HP (3700W) motor and a helical head.

Both machines have two feed rates, 7.3 and 9.1 m/min (24 and 30 ft/min), which helps picking the right speed depending on grain difficulty and time constraints. On top of the machine are also two rollers, to help bring the workpiece back to the other side for a second pass.

TIP: In this video you can see how to maintain a JET planer. The video shows a 15-inch planer, but its design is pretty much the same as the current 20-inch planers.

The JET JWP-208HH has 92 separate carbide insert cutters, which are positioned in 4 spiral rows along the cutterblock. These have several significant advantages, as already mentioned in the section about the 15-inch planers. To recap, spiral cutters tend to be quieter, better at dealing with complicated wood grain, and easier to set up and replace, and last longer.

Conclusion: Which machine should I get?

This is of course not a straightforward answer. It will depend on your budget and your specific needs. Do you regularly plane boards wider than 15-inch? Or do you often plane difficult hardwoods that require a bit more power to plane efficiently (and not take minimal passes each time)? Then an upgrade to the 20-inch planers could be worthwhile.

The 20-inch planers do lack the new innovative design of the 15-inch ones. Perhaps JET will upgrade the 20-inch models to the new design as well, but if and when that will happen is hard to tell, so it shouldn’t really impact your purchasing decision. The old design is tried and tested and has proven its worth.

Then the question remains: Should you upgrade to the helical cutterhead?

As mentioned before, there are only advantages to spiral cutters when compared to standard blades. They are easier to use, give better results, and make less noise. However, they do come at a cost and it will depend on your specific situation whether it is worth it.

If you are a professional, take into account the effort and time saved from less frequent blade changes and replacement, and as a hobbyist it will depend on how much you have to spend. A 15-inch standard model costs about half as much as a 20-inch model with Helical Head, so there is a machine for quite wide range of budgets.

We hope you find this guide helpful! Of course, we’re also curious to hear your opinion on JET’s planers. Which model would you go with? Let us know in the comments below.

JET is an American manufacturer of woodworking tools. It belongs to the same company that owns Powermatic. JET's products are aimed mostly at hobbyists, both beginners and serious enthusiasts. Their product range is quite wide and includes jointer planers, table saws, drill presses, belt sanders, and many more. JET's products are manufactured mostly in Taiwan.

JET released a completely redesigned version of their 15-inch planers earlier this year. This is something to keep in mind when looking at videos of older 15-inch JET planers on youtube. These are also solid machines, but work much more like the current 20-inch model. So if you are looking at a second-hand 15-inch model, focus on the 20-inch part of this guide instead.

Do Powermatic table saws still live up to the 'gold standard'? And which one of their saws is the best? Find out in this article.

JET makes two table saws: a contractor and a cabinet saw. What are their differences? And which one may be the best for you? Find out in this article. 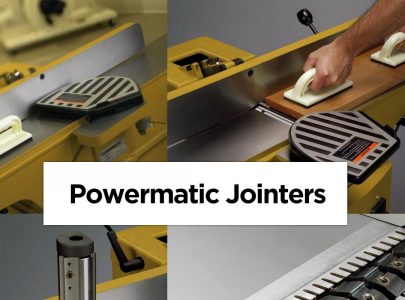 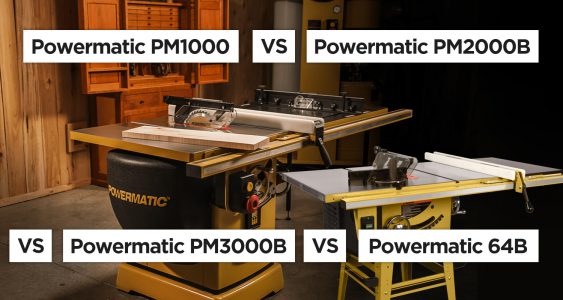 Do Powermatic table saws still live up to the ‘gold standard’? And which one of their saws is the best? Find out in this article. 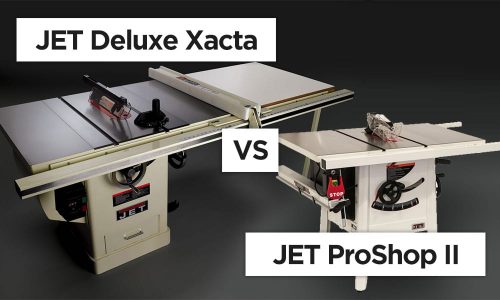 JET makes two table saws: a contractor and a cabinet saw. What are their differences? And which one may be the best for you? Find out in this article.